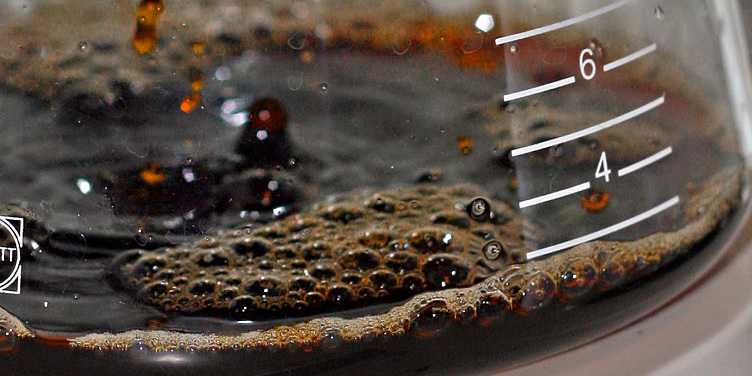 Go to any website that sells coffee-making products — I’m talking urns, percolators, brewers, that sort of thing — and you’ll notice that the products are listed like this:

Seems harmless enough, right? Nothing here but a picture, a price, and some benign title. But don’t be fooled by its dullness because it’s here, in these titles, where coffee companies hide their biggest marketing ploy. Look at this table, unaltered, taken directly from the legal spec sheet of Omcan’s “CP06 Stainless Steel 40 Cup Coffee Percolator”: 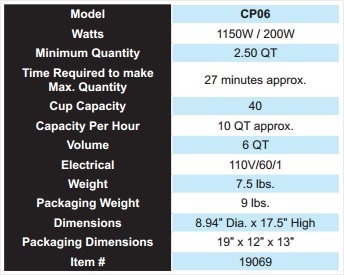 Boring, right? No one ever actually reads these things. That’s why this is the perfect place for a company to fess up. Do you see a misalignment of information here? Maybe this hint will help: 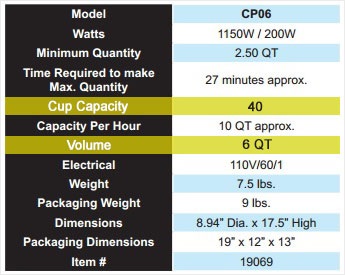 Unless you can count numbers on a sort of Rain Man level, you probably didn’t passively notice that the “Cup Capacity” and “Volume” amounts don’t quite match up, but look:

So which is it? 320 ounces or 192? A sixty percent difference is a pretty substantial chasm. To understand the seeming discrepancy here, just remember that the word cup can mean a few different things and, keep in mind, that there are people in this world called “Advertising Executives” who are very skilled at twisting words around. When used to compare the volumes of unlike things, the word cup usually means “eight liquid ounces,” but cup can also refer to something else: the white, ceramic, World’s-Greatest-Dad-type mug that people drink their coffee out of.

Several decades ago an advertising agency decided that their coffeemaker client should start listing coffee pot capacities by this World’s-Greatest-Dad definition of cup instead of by the more apt, unit-of-measurement sense of the word. Now, as you know, mugs — cups — come in all different sizes, and who’s to say how much liquid the average coffee cup holds? This trail-blazing advertising firm thought deeply about this question and decided that the average cup of coffee is equal to exactly five ounces, or three-fifths of an imperial cup, a 40% decrease in size. Soon the rest of the coffeemaker industry listed its pot capacities by this new World’s-Greatest-Dad cup measurement instead of by the old — half-a-millennium old — measurement. They did this, surely, to make things more convenient for the customer.

…And It Gets More Ambiguous

Now, if you’re buying a personal coffeemaker for your home, this isn’t that big of a deal. Most personal coffee pot brands — Bunn , Mr. Coffee, KitchenAid, Hamilton Beach — all measure themselves by the 5-oz cup, and even though a “12 cup” Mr. Coffee pot holds less than it advertises, all the competitors’ coffee pots skimp at the exact same rate. Besides, what family wakes up in the morning and drinks six whole pints of joe?

The people who should be wary of this whole 5 oz cup business are restaurant and hotel owners who are buying urns or percolators or high-capacity brewers for their kitchens. If you need a coffee urn that holds ten quarts of liquid, the ambiguity between “cup” and “cup” can lead you to a bad purchase. And that isn’t the end of it.

Since the ’60s, when coffeemaker companies quietly changed the definition of a cup to five ounces, the coffee industry has become increasingly stratified. Some present-day companies define a cup as 5 oz still, but others have started defining a cup as 6. Some companies say a cup is the imperial 8 ounces, but others go as low as 2. There is no standard anymore, and coffee device manufactures aren’t exactly eager to tell you about their eccentric beliefs regarding how much a cup is. Some, like the company that made the percolator exampled above, list their true capacity in the product’s specification sheet, but not all brands do that. Some companies bury their true capacity on separate websites or deep within their FAQ sections. Some companies don’t list their products’ true capacities at all, and in order to find out what you’re buying, you have to call up the manufacturer yourself and wait to speak with a representative.

We know that it’s a huge hassle to compare different coffee urns from different manufacturers — we know it because we already did the work for you. We combed through websites and phone listings and came up with this table of who considers a cup of coffee what. 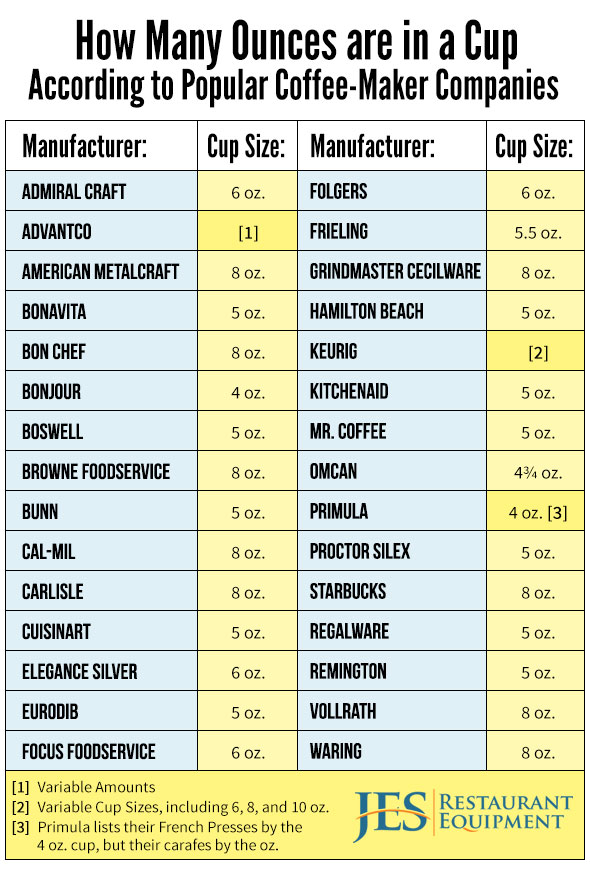 So now, with this table and a calculator, you might think that you can start shopping for coffee urns. Not so fast! This stuff goes even deeper. That one company up there, Advantco, doesn’t have an amount listed next to it. Well, that’s because when it comes to defining the capacity of a coffee cup, this company isn’t even consistent with itself. Depending on what they’re trying to sell, a cup of coffee can mean 5 ounces, 4.5 ounces, or — for a deluxe-model urn — 3.5 ounces. A “110-cup” Advantco urn listed for $80 seems like a bargain until you realize that their urn holds a gallon less liquid than the $85 “60-cup” model sold by another company, a company that doesn’t consider a cup of coffee to be just seven tablespoons.

So Here’s What We Did

We don’t fault most of these companies for adopting the ambiguous World’s-Greatest-Dad unit of measurement; 8-oz is, after all, difficult to visualize: you can picture a mug of coffee much more easily than you can picture __ ounces of fluid.

But still… it’s confusing and intentionally deceptive and it feels wrong. After we unearthed this whole cup thing, we rewrote the listings to all of our coffee products using less murky language. Now capacity is listed by the 5-oz mug and by the explicit ounce. We decided to start using the word mug now instead of cup, because mug can mean one of only two things. It can mean a cylindrical cup used for drinking coffee, or it can mean the unfortunate face of some really ugly dude. We hope that you’ll be able to differentiate between those two concepts, and if that’s still not clear enough, well, I don’t know what to tell you.

Are we late to the game? Did you already know about this coffee pot crock? Tell us about it in the comments!